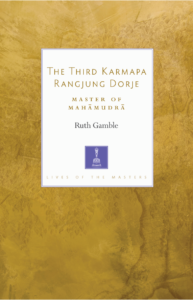 Ruth Gamble’s The Third Karmapa Rangjung Dorje: Master of Mahāmudra is the newest volume in Shambhala Publication’s Lives of the Masters series edited by Kurtis Schaeffer. Gamble’s introduction to Rangjung Dorje (1284–1339 C.E.), his life and work, represents a significant contribution to the field and will likely appeal to scholars and seasoned practitioners.

The book is divided into two main sections: a biography, followed by a translation of selected works. Rangjung Dorje, born into poverty, was the first person to be recognized as a third in a line of reincarnations. Readers who are interested not just in the events of Rangjung Dorje’s life but in his role in the history of reincarnation lineages, the Tibetan assimilation of Buddhism, the sacralization of the Tibetan landscape, the remapping of sacred sites from India onto Tibet, the close relationship between dzogchen and mahāmudra, the political rivalry between the early Kagyupas and the powerful Sakya school, and the relationship between these schools and Mongol court, will find much to delight in here.

Gamble’s expertise on the subject is foremost in the field (readers interested in the subject will also benefit from her book: Reincarnation in Tibetan Buddhism: The Third Karmapa and the invention of a tradition, Oxford University Press, 2018). She handpicks and concisely presents knowledge-gems gleaned from years of research. She corrects, for instance, the anachronistic assertion that Rangjung Dorje was an early advocate of the shentong over the rangtong views on ultimate reality; clarifies his relationship with the Nyingma tradition; discusses his influence on the Rimé movement of the nineteenth century; and briefly touches on the under-examined history of the terma tradition at Tsurpu Monastery.

The book’s second part, the selected works, include Rangjung Dorje’s writings on mahāmudra and meditation (which Gamble translates as “cultivation” to good effect) along with some rarities from his Collected Works. One such treasure is a seldom-told story about one of the Buddha’s previous lives as a woman and a dancer named Jagatī Śrī (167). The story is extraordinary both for its elevation of a marginalized figure and for the lessons it conveys. For, in this life, the “Buddha-to-be” (to use the author’s term) takes the form of a beautiful young woman in order to impress upon her audience the ephemerality of beauty and youth. She provokes desire in order to subvert it.

Another surprising yet delightful group of short texts that are included are of a genre that might be best described as medical and/or botanical. In these texts, Rangjung Dorje details how to extract the essences of various regional plants in order to use their properties both for bodily health and to aid spiritual accomplishment.

As the author notes, the life and works of Rangjung Dorje are vast and this book serves as a compact, erudite introduction to his immense world.

But, in keeping with an enduring truism, this work’s greatest strength—its robust scholarship — from another point of view, could also be considered something of a drawback. The book assumes a knowledgeable audience and therefore spills little ink bringing readers up to speed on niche topics well-known to scholars and experts in the field. For example, a footnote on the Samye debate (c. 792–794 C.E.) between Indian and Chinese Buddhists that resulted in the censuring of Chan Buddhism in Tibet does not elaborate on the topic; it sends readers elsewhere when even a brief summary of the event could orient readers who are unfamiliar with it (n. 260, p. 231). Similarly, an introduction of the “five poisons, the three poisons” (163), the “ten grounds and five paths” (165) is left unelaborated. The reader may be left wishing there were footnotes to clarify these categories. These are only small points in the larger context of this wonderful work. Still, the concern is whether there may have been a missed opportunity to appeal to a wider audience here.

For me, the shining moments of this book are quiet ones; moments when Rangjung Dorje, the human, comes into focus. A potter’s son, his mother gave birth to him at night without shelter, exposed to the elements. The story goes that when he was born, he saw the moon and felt happy. As Gamble notes, his connection with the moon is symbolic, auspicious, transcendent, but it also points in the other direction to his parents’ meager material means, to his subaltern status at birth (38–9).

When Rangjung Dorje is around thirty years of age, after a period of intense retreat and a year-and-a-half gap in his archive, he begins to write again. He is ill and concerned for his life. He laments his inability to overcome his doubts, despite receiving dharma from the best teachers of his day. He resolves to redouble his efforts to help others and also to let himself rely on others more (86).

Life-writing at its best is fundamentally egalitarian in spirit. In its finest moments, the genre reveals how humans struggle to construct meaningful lives for themselves—a struggle that we can all relate to despite our circumstances. I am confident that scholars and experienced practitioners will delight in this important new offering, and I hope that curious newcomers might give it a try too.

Matilda Perks is a Ph.D. student at McGill University who studies the history of Buddhist modernism(s) and Tibetan Buddhism outside of Tibet with a focus on the life and works of Tibetan lama, Chögyam Trungpa (1940-1987), and the development of the Vajradhatu community.