The Selfless Ego: Configurations of Identity in Tibetan Life Writing 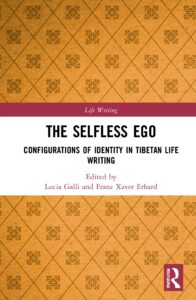 Stories of the Ego’s Struggle with Selflessness

The title Selfless Ego immediately suggests a juxtaposition or paradox. The conflict implied in the pairing, however, is deeper than its seeming self-contradiction. Rather, it describes the presence of a real Tibetan cultural tension, one this eponymous volume takes as topical. On one side, “selfless (bdag med)” denotes the antidote to self-fixation (bdag gces ’dzin pa), one of the primary culprits of suffering per Tibetan spirituality.i On the other hand, “ego” suggests a psychoanalytic framework, where the ego emerges between the pressures of societal mores (the superego) and the urgings of individual desire (the id). “Selfless ego” thus conveys the especially vexed ego-conflict unique to a Tibetan ethos that not only prizes altruism but sees any preoccupation with self—even the individual pursuit of happiness—as ultimately a cause of the eudemonic decline. While the Tibetan religio-cultural spirit implores a type of self-effacement, psycho-sociological forces reassert the ego at the intersection of the individual and society. “Selfless ego” thus does not denote a resolution of this tension. Rather, it reaffirms that conflict, the difficulties of navigating an ego-generative society that also glorifies ego death.

From the viewpoint of literary analysis, the biography is the preeminent battleground between selflessness and the ego. Because the biography is essentially an exercise in identity construction, one can anticipate how Tibetan spiritual proclivities might problematize it from the outset. The biography seeks to build up exactly what Tibetan religious sentiments seem compelled to tear down: morally corrosive valorizations of self. Nevertheless, Tibetan literature does not eschew the biography, and the endurance of the Tibetan biographical genre itself bespeaks the durability of this tension between selflessness and the ego.

The chapters of The Selfless Ego: Configurations of Identity in Tibetan Life Writing therefore all exam this endemically Tibetan ambivalence around self through the broad heuristic of the biography. Through conceptualizing the biography as a literary device for identity construction, rather than as a genre simpliciter, this volume gives an excellent structural-functional analysis of how biography functions within Tibetan literature. Selfless Ego thus succeeds in offering an analysis of Tibetan biography far more compelling than, perhaps, a loosely topical anthology on biography. Most chapters speak to this genre’s use toward certain ends—be they religious, political, sociological, historiographical, etc.—with particular sensitivity to the unique precariousness of the biographical enterprise within a Tibetan milieu suspicious of identity.

Selfless Ego is divided into two parts, the first concerned with religious biographies and the second culling from secular sources. The editors wisely set the groundwork for their project by leading with Ulrike Roesler’s chapter, which is the most theoretical of the group. Roesler construes “Tibetan Reflections on Autobiographical Writing” as a self-conscious recognition of the need to “balance between the norms of humility and self-confidence” (171)—between the humility indicative of selflessness and the self-confidence of a strong ego. Several chapters tackle the particularly volatile role of autobiographies in Tibetan literature, which, thanks to their self-referentiality, must walk the thinnest line between humility and self-confidence. Franz Xaver Erhard’s chapter examines Doring Tenzin Penjor’s (b. 1750) autobiography, which serves as a paragon of the tension surrounding identity construction. Erhard notes that while autobiographies were “not well-received in the Tibetan Buddhist climate which required a style of diffidence and self-effacement,” that the autobiography cum “narrative strategy” was undeniably beneficial in “legitimising the Doring family’s but first of all Tenzin Penjor’s claim to power and wealth” (329). Rachael Griffiths’ account of Sumpa Khenpo Yeshe Peljor’s (1704-1788) autobiography chronicling the Lhasa civil war of 1727 reveals how the genre can be marshalled toward political ends. Using his narrative account of the devastation of war, Sumpa Khenpo entreats his readers to seek peaceful solutions in the future. We can anticipate that his proclaimed peaceful motivation may have buffered against any suspicion that Sumpa Khenpo was engaging in braggadocio by writing about himself.

Lucia Galli also explores a compelling subgenre of the autobiography: the diary (nyin tho or nyin theb). Even here we see both of these modes: self-construction and self-effacement. Giving an analysis of Tibetan diary writing through the longue durée up to the present, Galli notes that in traditional Tibetan diaries, “the writer rarely writes exclusively for his or her own eyes” (349). Thus, while the 8th Situ Paṇchen Chökyi Jungne (1700–1744) used the diary to express his passion for Sanskrit and thereby “place him among the great Tibetan lotsāwas (lo tsā bas, ‘translators’),” his persona was also marshalled in an attempt to recenter Sanskrit studies at the heart of Tibetan scholasticism (348). As Galli notes, such efforts reveal the use of “personal annotations” toward “the creation of a common memory and identity” (349), again valorizing the personal insofar as it aids the group.

Selfless Ego also explores these issues from the standpoint of women’s studies. Isabella Ofner examines two contemporary works by female Tibetans in exile, Dorje Yudon Yuthok (19121998) and Diki Tsering (1901-1981), mother of the current Dalai Lama. Using post-colonial feminism, Ofner foregrounds the issue of ego qua tension with society, demonstrating how Yuthok and Tsering’s memoirs provide alternate histories in order to combat restrictive Tibetan cultural expectations that permit only a monolithic image of femininity. Hannah Havnevik’s chapter examines a similar conflict. Rather than exploring how women struggle to find their voice in a patriarchal society, Havnevik notes how men in that same society ventriloquize female biographical voices in order to support patriarchy. Specifically, she focuses on the depiction ofTrülzhik Tongdröl Dorje’s (1862–1922) mother, Tashi Tsomo, in the former’s biography, demonstrating that female adherents “achieved praise and recognition as advanced bodhisattvas” via their support of male spiritual practitioners, highlighting a “submission to androcentric norms” (268).

We also read of similar selfless-ego tensions in the lives of prominent spiritual figures. David Templeman offers a fascinating analysis of a short autobiography from Tāranātha (1575– 1634), whose introductory section serves almost as a metanarrative on autobiography. Here, Tāranātha discusses his own ambivalence in writing about himself, insisting that while “stories about suffering and [eventual] decrepitude bring me no joy whatsoever” that he has recounted them at the “insistence of other people, even though there is nothing of great importance in it.” Templeman remarks that Tāranātha’s demurring here reflects “fear of being seen as either a flatterer or boastful,” which “sets a precedent for his further writing” following “a literary model commonly found in Tibetan literature” (191). Thus, we see Tāranātha as emblematic of the type of precarious balance demanded by the biography as identified in Roesler’s chapter. Cathy Cantwell’s article focuses on the Dudjom lineage and demonstrates how the use of biographies toward identity construction can be a double-edged sword. Sometimes, it reinforces the validity of a reincarnation lineage, especially when there is clear identity continuity and a new incarnation “displays all the anticipated qualities and appears to take up his predecessor’s work with zest” (240). However, when there are discontinuities, these can be marshalled by dissenters who may compare “unfavourably the current incumbent’s character and qualities with those of the previous lama” (239). Again, we see how identity construction holds a tenuous position in the Tibetan religiopolitical sphere, both able to reinforce and deteriorate the institutional status quo. Sangseraima Ujeed’s chapter on Khalkha Dzaya Paṇḍita Lobsang Trinle’s (1642 1715) biography gives a similar account of the role of the biography in lineage formation, specifically their “ability to link together masters from the past, present, and future” (236).

There are several other excellent chapters on which there is insufficient space to elaborate, including Sarah Shaw’s on the biographical tradition of Ajahn Mun, Cécile Ducher’s use of songs (gur) in Marpa’s biography, Lama Jabb’s on the songs of Dubhe (1966/7-2016), and Charles Ramble’s fascinating take on Tibetan biography cum material culture. There is little here to say in the way of criticism. But if pressed, I gesture back to my construal of this volume as primarily structural-functionalist, that is, as a type of Durkheimian methodology that conceptualizes the biography as providing some functional purpose within the Tibetan sociological context. This harbors no prima facie error, but I wonder to what degree it bespeaks a certain hermeneutic of suspicion, a desire to look behind the curtain and see what biographies are really about, as if life narratives are not in and of themselves compelling enough to explain their existence. Suspicion that the biography is not self-justifying may be warranted; biographies always seem for something. But perhaps there are other possible explicans in lieu of religio-poltico-sociological function. Inspiration? Nostalgia? A coping mechanism? Maybe. In any event, Selfless Ego is undeniably a worthy addition for anyone interested in Tibetan literature and a valuable contribution to scholarship on the unique Tibetan formulation of the biography.

Jed Forman is a doctoral candidate in University of California Santa Barbara. His research interests include area of Buddhist epistemology, the cognitive science approach to religion, and their intersections with Western phenomenology. His forthcoming publications include a monograph with the Yakherds concerning the epistemology of Taktsang Lotsāwa to be published by Oxford. He also works also as translator for 84000: Translating the Words of theBuddha.