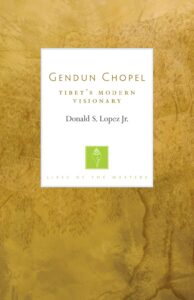 Donald S Lopez, Jr. has published six books on the Tibetan figure Gendun Chopel, including three works of translation (two in collaboration with Thubten Jinpa) and three works of scholarship. This particular text is part of the Lives of the Masters, a series edited by Kurtis Schaeffer and published through Shambhala Publications. This series includes works on the lives of Buddhist masters including Tsongkhapa, Atisa Dipamkara, S.N. Goenka, and Karmapa Rangjung Dorje. Gendun Chopel makes an interesting bedfellow for such a series. As Lopez himself asks, “was this man—who described himself as a ‘discerning beggar’ and a ‘cosmopolitan traveler’—also a Buddhist master, deserving of a volume in this series?” (112). For Lopez, the answer is yes – Gendun Chopel is a Buddhist master not only because of his intellect and his faith in the dharma, not only as a manifestation of ‘crazy wisdom,’ but also as a philosopher grappling deeply with how and by what means to understand the true nature of reality.

I comment in this review on the sections of the text previously unpublished: chapters on Gendun Chopel in Tibet, India, his return to Tibet, and the Buddhism of Gendun Chopel. Chapter Three covers Gendun Chopel’s time in Sri Lanka and is adapted from a chapter previously published in Himalayan Passages: Tibetan and Newar Studies in Honor of Hubert Decleer. The second half of the text contains excerpts of Gendun Chopel’s writings, which are reprinted from The Madman’s Middle Way: Reflections on Reality of the Tibetan Monk Gendun Chopel, In the Forest of Faded Wisdom: 104 Poems by Gendun Chopel, Grains of Gold: Tales of a Cosmopolitan Traveler and The Passion Book: A Tibetan Guide to Love and Sex. I refer the reader to those texts directly and to the many reviews that already exist of those works for a sense of their breadth and features.

The book is organized into two main sections: The Biography and The Writings. Lopez interweaves passages of Gendun Chopel’s essays, poems, and letters into the biography he constructs, which is mainly chronological. “Chapter One: Tibet” follows Gendun Chopel’s early life as the son of a Nyingma master, a reincarnation of Dodrak Tulku, a student at Yama Tashikhyil and a Gelukpa monk at Ditsa, Labrang, and Drepung Gomang. This split personality—at once a Nyingma practitioner and a Geluk scholar—will come to characterize much of how Lopez understands the complex figure of Gendun Chopel. Also central to Lopez’s depiction of Gendun Chopel is his relationship with non-Tibetans and non-Buddhists. We see that Gendun Chopel meets American missionary Marion Griebenow at Labrang (12) and the Indian scholar (and Communist) Rahul Sankrityayan in Lhasa (16) during his early years. This latter relationship would be the catalyst for Gendun Chopel’s journey to Nepal, and subsequent travels throughout India, Sikkim, and Sri Lanka for the following twelve years.

‘Chapter Two: India’ focuses on Gendun Chopel’s travels, studies, and translations in India. Lopez accesses Gendun Chopel’s experiences through his essays, poetry, and letters, taking the reader through the publication of Gendun Chopel’s travel guide, the famous Guide to the Sacred Sites of India. Gendun Chopel spends time in Darjeeling and Kalimpong, where his relationships with Sikkimese monk S.K. Jinorasa, Tibetan Christian Dorje Tharchin, and American yogi Theos Bernard would result in a number of translation and publication efforts. Although the results of many of Gendun Chopel’s translation projects seem to have been lost, it appears that he translated from Tibetan and Sanskrit into English, from Sanskrit, Pali and English into Tibetan, and produced original writing in both English and Tibetan, frequently mixing Sanskrit, Tibetan, and English terms in his journals and letters. Lopez paints a picture of Gendun Chopel as an intelligent, sometimes prideful and morose, savant. Although specialists might find the lack of bibliographic information and primary source material (translations, for example, refer to Lopez’s other texts instead of original sources) slightly frustrating, this text is a readable and approachable introduction to Gendun Chopel as a Buddhist figure.

Lopez begins ‘Chapter Five: The Buddhism of Gendun Chopel’ by highlighting how Gendun Chopel describes other religions. Gendun Chopel forms important nonsectarian, inter-religious relationships that, Lopez suggests, were influential for his own beliefs. Gendun Chopel’s interest in Islam, Christianity, Hinduism, and Theravada Buddhism was due in part to his personal and institutional relationships. He was sponsored and supported by the Maha Bodhi Society, founded by Anagarika Dharmapala, and spent time in the Roerich family home in Kulu, the Himalayan Research Institute. Both of these institutions were also related in various ways to the Theosophical Society and to a bourgeoning Tantric movement in the United States and Russia. He disparages Christianity and Islam for their violence and blind faith (96-100) while suggesting that the depictions of Hindu philosophy presented in Buddhist scripture are more two-dimensional than the philosophies themselves (94). Although fascinated with studying various world religions and philosophies, Gendun Chopel was not a Universalist – he did not accept that all religions were ultimately the same (93), nor were his reform aspirations based purely on a ‘modernist’ attempt to separate the philosophical elements of Buddhism from their magical, other-worldly elements (102). Gendun Chopel prayed to Tara, wondered if maybe his arrest and misfortunes in Tibet were due to enraged denma goddesses for bringing non-Buddhist scripture to Tibet (103), and had visions of Avalokiteśvara (68). The Buddhism of Gendun Chopel is both deeply philosophical and experiential.

For Lopez, Gendun Chopel is a pioneer of an historical method or critical historiography in the field of Tibetan religious studies. His use of extensive sources and archives, corroboration of evidence from histories, archeological sites, material culture, epigraphical evidence, biographies, and foreign sources, proves his belief in 1) the importance of attention to historical detail in the construction of Buddhist history and 2) the importance of the tangible facts of the past for understanding Buddhism and Tibet’s place in the modern world. At the same time, Lopez repeatedly quotes Gendun Chopel’s famous line, “I am uncomfortable about positing conventional validity” (90, 107, 247-250). Despite his rigor and great effort as a scholar and translator and his criticism of what he viewed as incompetent scholars and translators who came before him, his ultimate truth was the ‘inexpressible and inconceivable middle path’ (109). That is, Gendun Chopel believed that conventional truths were merely majority opinions and even descriptions of Buddhas and heaven realms were simply machinations of the ignorant minds of men. Ultimate Truth could never be captured or understood through intellectual study, ethnography, translation, etc. In contrast with his academic aspirations, Gendun Chopel viewed Buddhism itself as having a higher purpose. “The purpose of the Buddhist path is to create an understanding of what the mind has never previously known” (109). It is this, ultimately, that seems to convince Lopez most strongly of Gendun Chopel’s status as a Buddhist master.

Gendun Chopel was not the perfect Nyingma tulku, the perfect Gelukpa monk, the perfect statesman or diplomat, not even the perfect layman. It is, in part, due to our proximity to Gendun Chopel, our access to sources that reveal elements of his personal life, that allow us to see and critique Gendun Chopel as a complicated and imperfect Buddhist man. “It was Gendun Chopel’s fate to confront the madness of modernity like no Tibetan before him, to be portrayed not in the warm tones of the thangka painting, but in the starkness of the black and white photograph. Perhaps we know too much about him to imagine him to be a Buddhist master” (xii). Although Lopez does not go so far as to make the claim, his presentation of Gendun Chopel suggests that biographies of more traditional masters of Buddhism, those whose status as properly Buddhist has been subject to less scrutiny, lack the complexity of Gendun Chopel, not because they were less fraught figures, but because of what persists of their lives. As Gendun Chopel himself commented on the distorting nature of time on the historical record, it may not be that Gendun Chopel struggled more to adhere to Buddhist vows or Buddhist doctrines, but rather that we simply know less about the personal lives of the historical figures of the Buddhist past. The whitewashing of history, along with the strong faith for masters of the past, may be responsible for the vision we have today of perfectly faithful and masterful Buddhists. Maybe Gendun Chopel, with his at-times-blasphemous intellect and very human faults, is simply a more realistic version of how all Buddhist masters lived, contended, and died in this world. The kind of biography Lopez constructs, along with Gendun Chopel’s own research methods, encourages those of us who read Buddhist biographies of the past to think critically about sources and conventions of literary genres. Most importantly, Lopez’s work provides an example of how to consider the great thinkers of Buddhism as imperfect and complex, and yet still absolutely, fully Buddhist.

Kati Fitzgerald received her Ph.D. from The Ohio State University’s Department of Comparative Studies in 2020 and is currently a lecturer in the Department of Theology and Religious Studies at Saint Joseph’s University. Her research focuses on contemporary Tibetan religions, with special emphasis on women’s religious practice, the lay community, oral transmission lineages, and religious labor.